The POW Camps/The Premonition and The Railway

In the Camps my father was apparently known as a healer, like many men, he had helped many others during their fight for survival. A story that my sister Melanie reminded me of, was that he had a premonition during building work on the railway.

He apparently foresaw the collapse of a cliff under which men were working. He managed to convince the Japanese guards of what he saw and they eventually took notice and moved the men away from the area and indeed the cliff did collapse.

I know very little about the experiences of my grandmother Violet. The following was sent to me by Carol Cooper. "It is taken from a diary kept by T.P.M. (Tiny) Lewis, a school teacher who was interned in the Gaol.

April 4th 1942
Met Mrs (Dr.) Smallwood and Mrs Shelton-Palmer out on a visit from Changi.

Sept. 11th 1944
Both Mrs Shelton-Palmer and Mrs Graham-White (wife of the Archdeacon) are very ill in the Women's Camp.

"As in September 1944, the internees were in Sime Road Camp, Singapore having been moved from Changi Gaol in May earlier in the year to make room for the military POW'S, Mrs Shelton-Palmer would have died not in Changi Gaol, but in Sime Road Camp". End of quote.

This information was sent to Carol by Mr Harry Hesp of Warrington, Cheshire. I spoke to Harry and he explained to me how the meeting described on the 4th April would have come about. Although the men and women were kept separately in the early days it was still possible for them to meet at the perimeter of the camps.

This picture from the camps was given to me by a friend of my father after his death.
(My father had given him the picture some years earlier.) 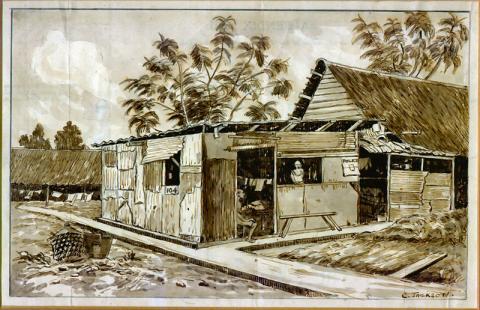 I have since discovered that the artist C. Jackson is mentioned in a number of places on the net. Any further information about him would be welcome.

If the reverse side of the picture was visable you could see that it is drawn on a page from an accounts book.

Charles Gretham Jackson's entry in the Changi Register shows he was 62 at Internment on February 20 1942. His wife was in the women's section of the Prison and he had no other next of kin. Many of his drawings passed to other internees and several have survived in their collections. The drawing you have was drawn in Sime Road Camp.

This canvas bag contained items that my Dad must have carried around with him in the camps. His medical record was found in this bag. 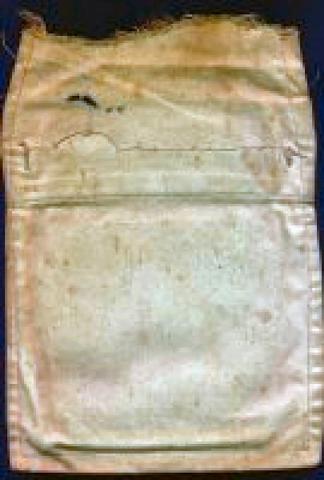 This was the Medical Record found in the above Canvas Bag, my father suffered from bouts of Malaria for the rest of his life. 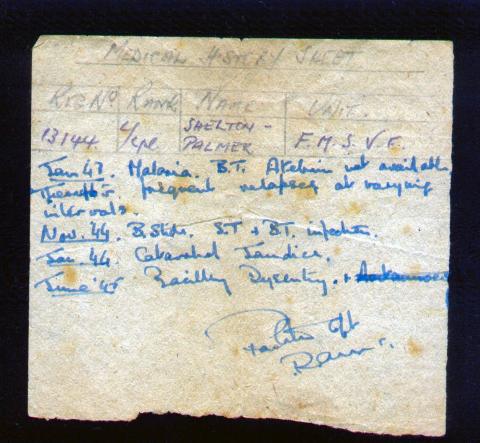 This map shows the locations of many camps. I am uncertain if it indicates camps he was held in or maybe it indicates locations for other family members. The map is large, the second part is below.

This is a card sent to my father in the camps by his sister Betty. Betty and the 2 boys, Neil and Michael were evacuated to Australia from Singapore when it fell to the Japs, and her husband Ernest Robert William Spaull, joined the Indian Army. He was unfortunately shot by his own sentry when he returned from a night on the tiles and forgot the password to get back to his barracks. 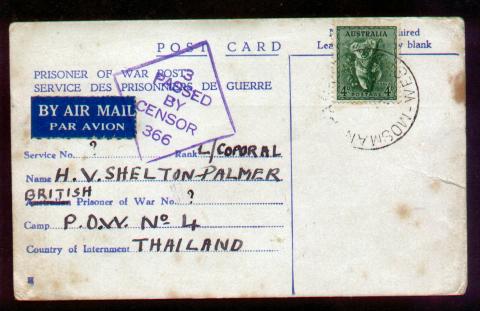 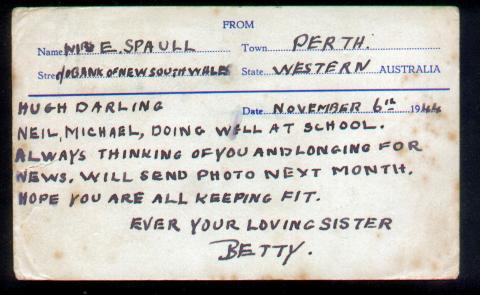 This information was sent to me by my cousin Athney in South Africa "Of course as you know Neil, Michael and Betty were evacuated from Singapore when the Japs took over, they barely got away....they had to destroy their home and shoot all their animals and were evacuated to Australia (Perth) together with Betty's friend and her son Kitty Peters and Douglas...both are now deceased....Kitty's husband's name was Alec."

This is a carbon copy (I think) of the "No Surrender" order issued on the 4th September 1942 by Colonel K.B. Holmes Commander of the British and Australian troops. The original document is fragile and difficult to read. Reproduced here is a scan I enhanced to make the text readable. The second half of the document is below. 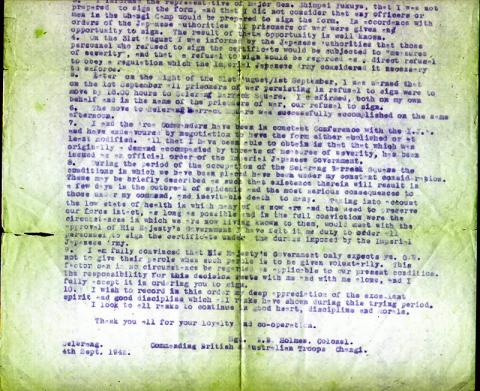 My grandfather survived the camps and returned to UK. My sister and I stayed with him and his second wife for a few months when were very young. I remember him as rather remote but friendly.

In Malaya he was certainly in the Masons. After his death my father returned a ceremonial apron to a Scottish lodge.

Pat Harrison, another family member died on the railway.

Dad was apparently somewhat of a ladies man (he married my mother after the war), this is the text of a note sent to him by "Peggy" on the boat home after the liberation. The boat was I think the SS Chitral, its hard to make out the correct spelling.

Please excuse pencil but some dirty double crosser has taken away the ink. It was fine seeing you this morning, did it cause any comment? I expect some of the lads will be around this afternoon so I shan't be so conspicuous. I didn't spend much time on deck this morning, saw George for a short while, also had a natter with Jumbo and introduced the Professor to a wren who knows his wren cousin and left them happily chatting.

There is a dance on deck this afternoon so I guess I'll have to find my way there. I'm not really very keen to go, I wonder if you'd have been there if you hadn't gone and got malaria. I do hate the serge uniform, its hot, stuffy and most uncomfortable. I think I'll go back to Columbo, I did love the sun and sea. A week today (unreadable) be nearly home, amazing thought - then - what next?

I expect I shall spend the first few days chasing round visiting friends, then I shall have to go and visit my relations, well my mother anyway, and some time of course I must go to London on a shopping expedition, strange if I bumped into you while I was up there, especially if you had a devastating blonde in tow!!

Hurry up and get better and consider yourself kissed goodnight.